There it is, the projector that does all the serious work in The Phoenix. 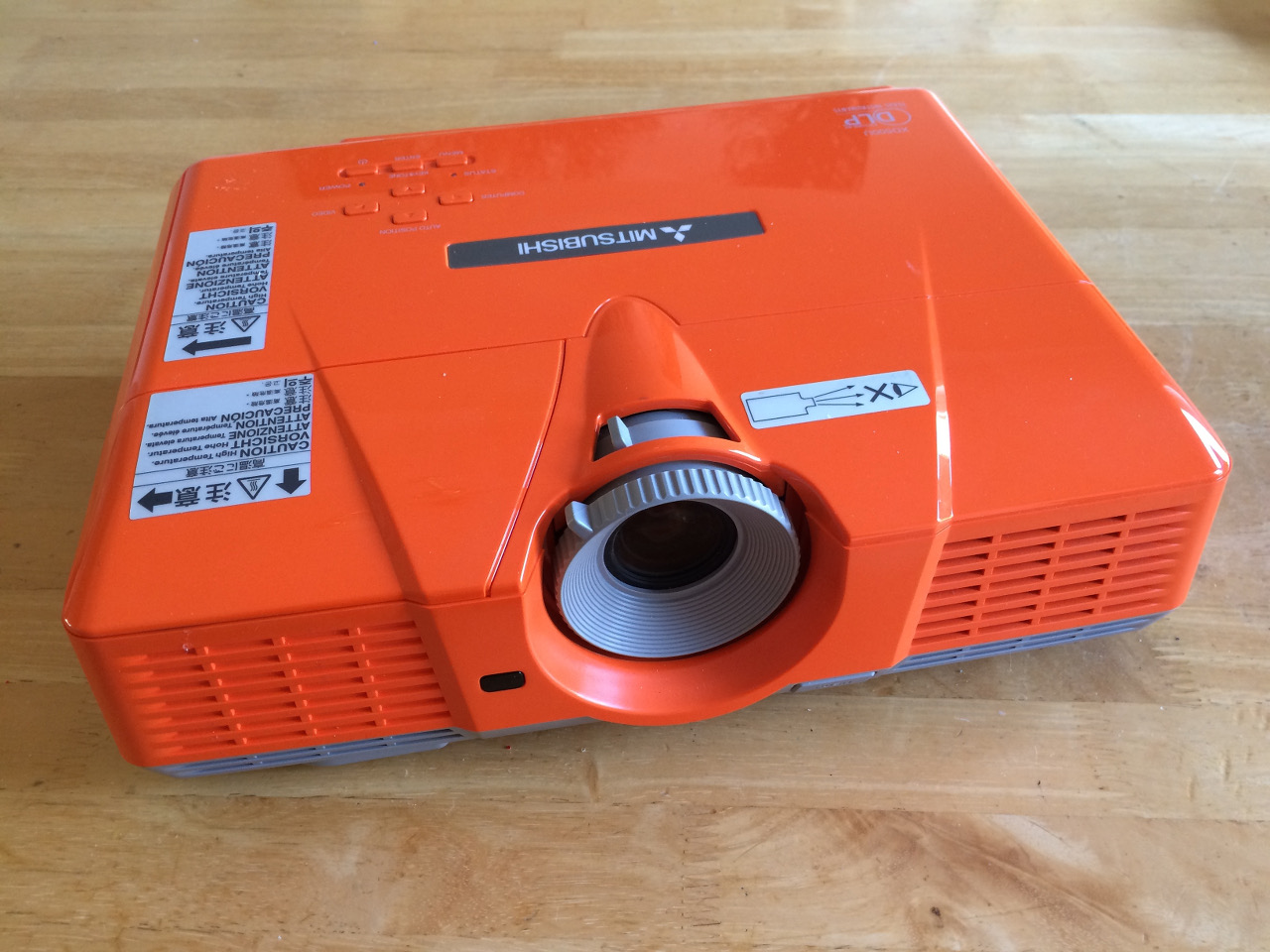 This is a Mitsubishi XD500U DLP projector, one that I picked up on eBay for less than £50. It had a few hundred hours of lamp life left and minimal speckling on the projected image. It’s not perfect by any stretch of the imagination but I was looking for a projector that someone had put out to pasture, so I could give it a new lease of life.

I checked it out when it arrived and all was working fine but I was nervous about taking it apart, as there were some modifications I would need to make to the internals to allow me to use it in an SLA 3d printer.

When I finally plucked up enough courage to make the mods, I started documenting the process. Remove this screw… 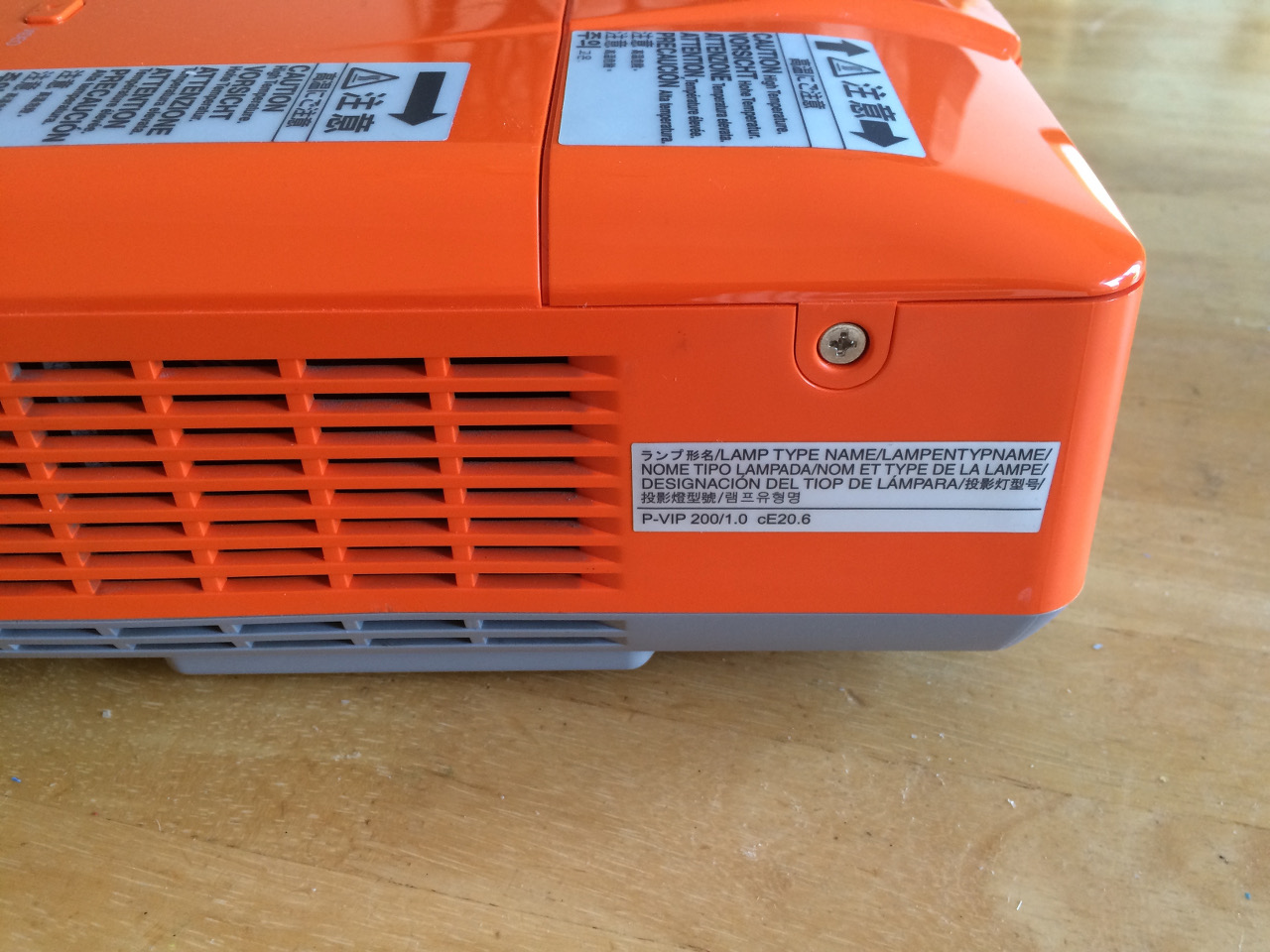 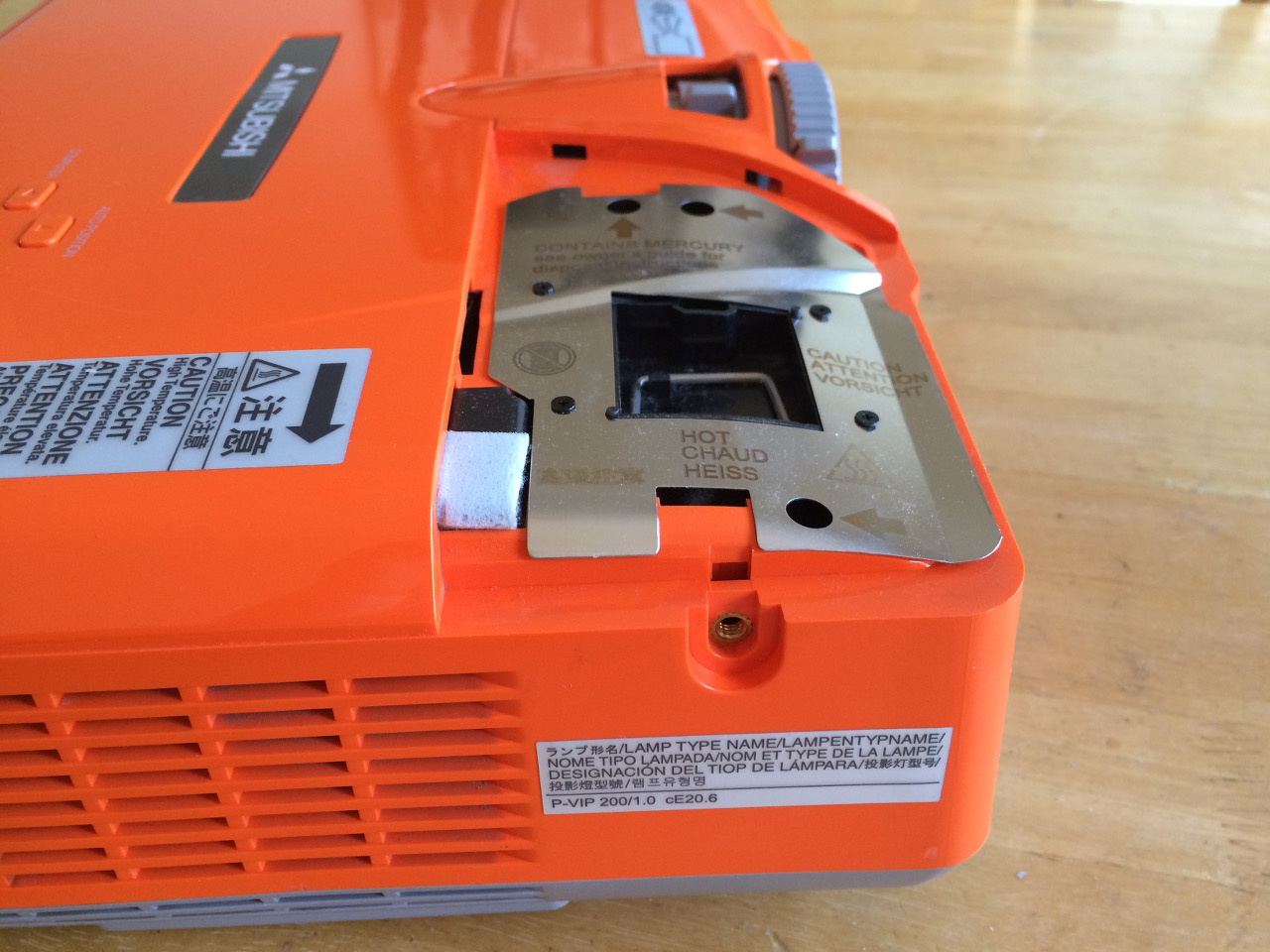 Remove the three screws marked with the arrows, lift the handle and take out the lamp.

NOTHING…  It wasn’t budging.

I took off the heat plate to get a better look, still nothing. “It must be stuck” I thought. I’ll give it a harder tug.

I ripped the lamp module in half, with the bulb dangling from the piece I now held in my hand.

With the bits that were left in the projector, I could see that there are two flanges (where the cutouts are in the metal heat plate. Had I put the a screwdriver or a flat blade down each slot, it would probably have lifted out straight away.

I was gutted and felt like throwing the whole thing in the bin. Pressing on, I pulled the rest of the lamp module out, glued the plastic bits back together and set them to one side. Hopefully I could save this and mod the lamp module later.

In all the drama of the broken lamp, I forgot to take photos. So the documentation process went completely to pot.

The rest of the mods were to the projector lens. After removing many screws, I managed to pry off the top case. That wasn’t easy and there were a couple of times where I thought I was going to crack the plastic.

Eventually the case was off and I was able to remove the lens assembly, which looked a lot like this. 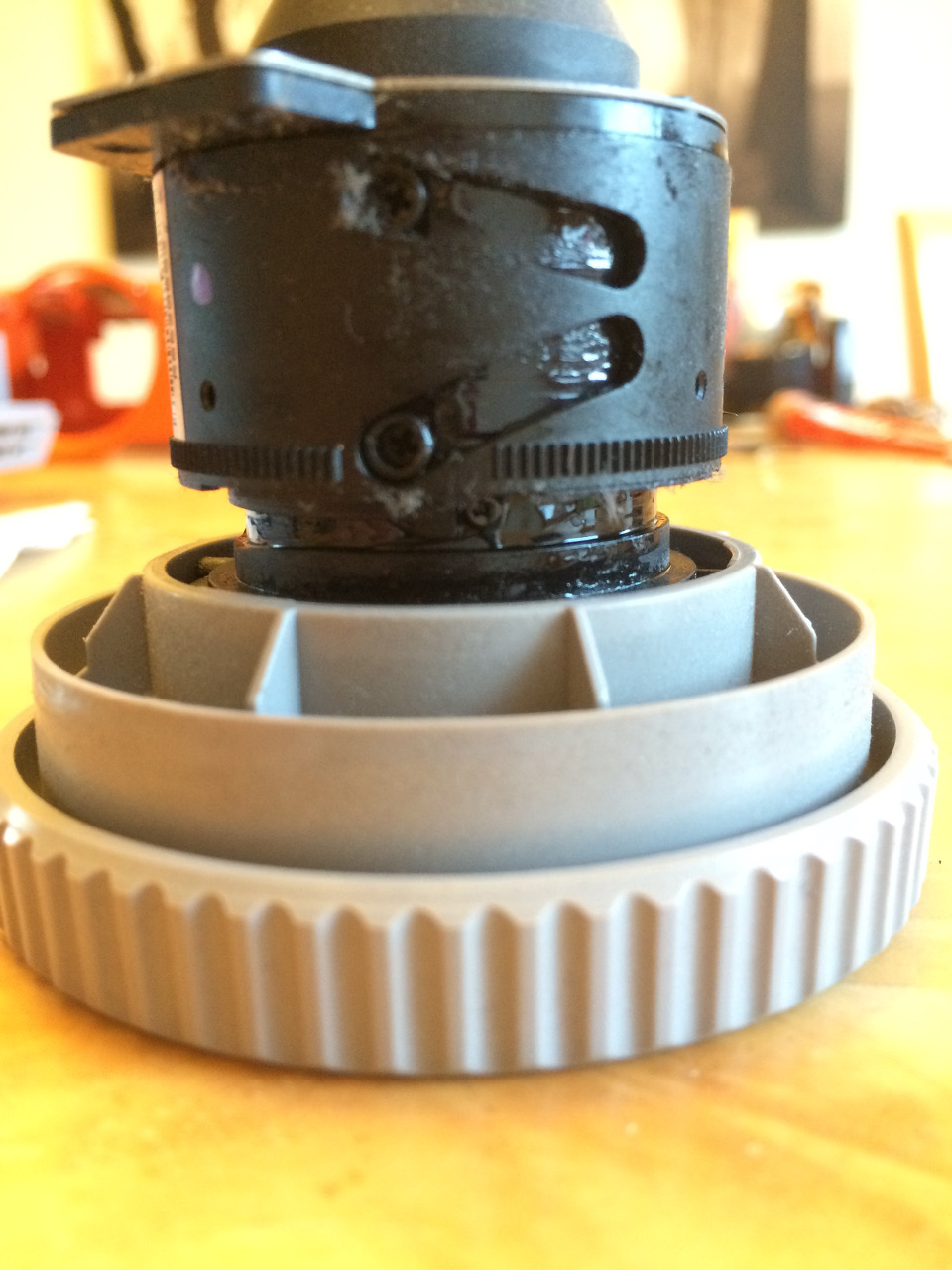 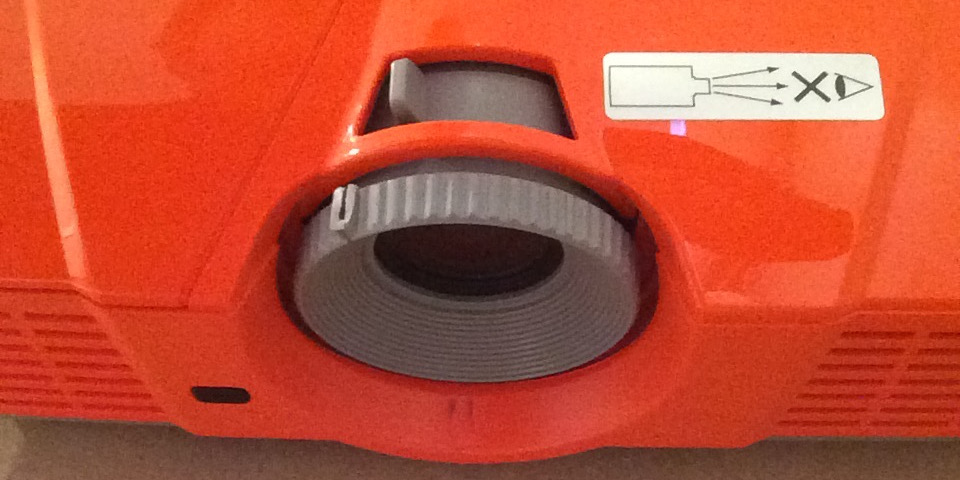 I also nipped the end off the indicator bar that sticks out from the focus ring. This was too long to allow the whole thing to swing round to the lines I’ve marked at the 6’o’clock position.

By the time I’d putting it all back together, I was able to mod the lamp. 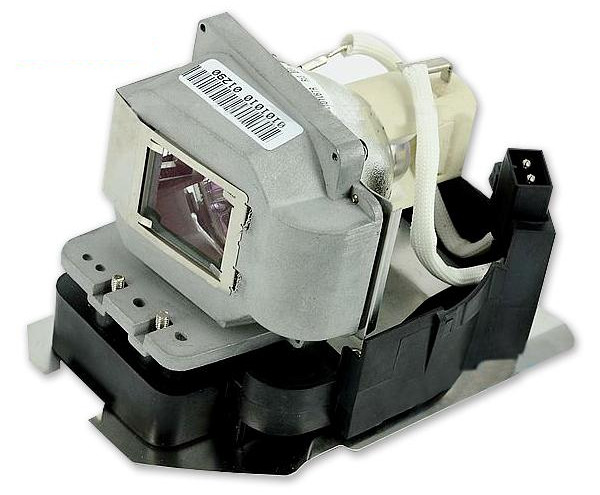 The glass pane, that’s held in by the metal frame has to come out. It provides a thermal barrier by blocking IR but more importantly for this project, it blocks UV that comes from the bulb. As I need UV to cure my resin, it had to go.

I put the bulb back in, connected up the power, turned the projector on and held my breath. The bulb came on. The projector started up and I had a picture. Phew.

To get a feel for where I need to put my shelf on the frame, I grabbed a sheet of A4 paper, tac’d it to the wall and projected a grid onto it.

After a little tinkering, I ended up with this. 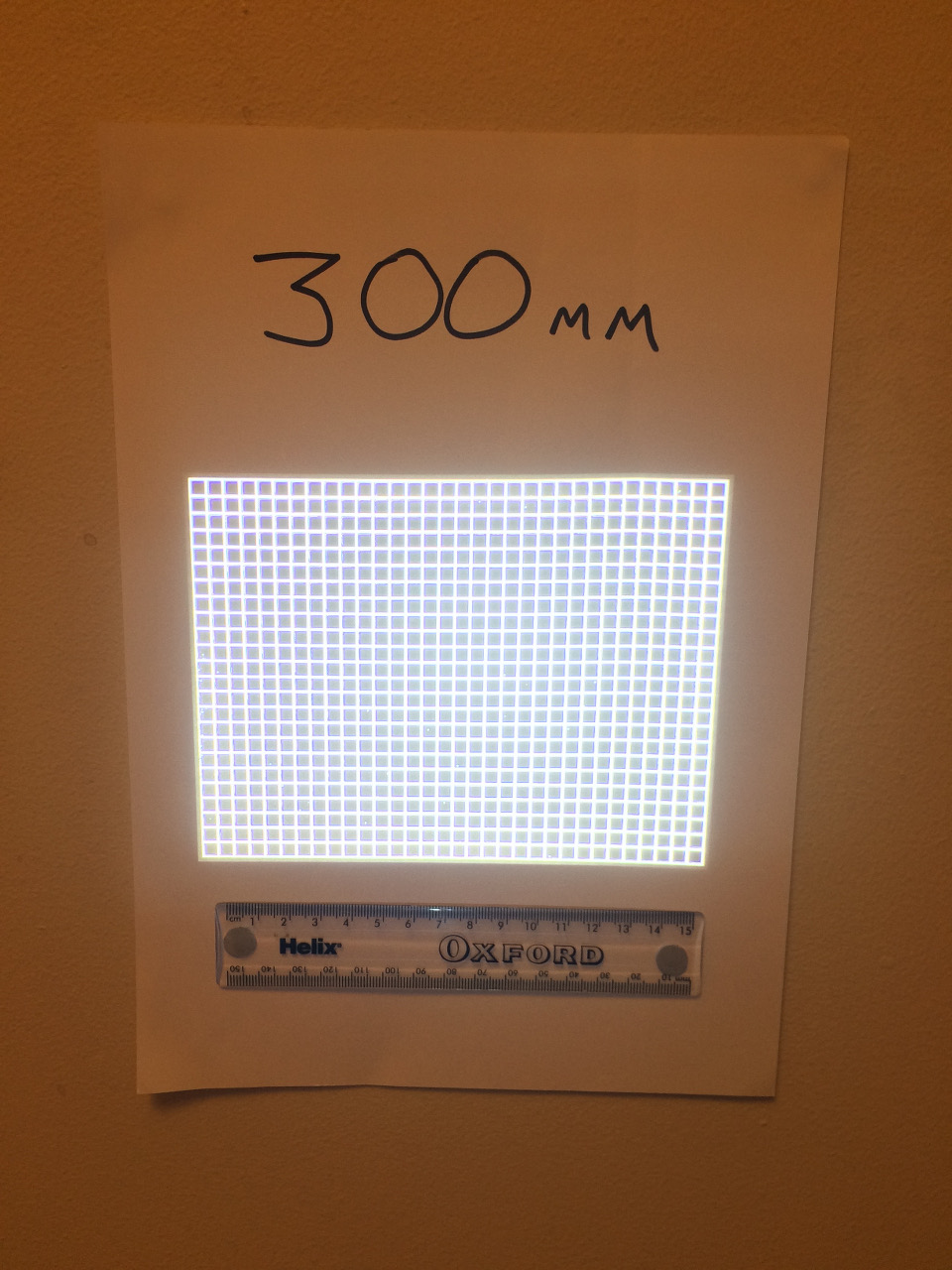 With the front of the projector 300mm away from the wall, I was able to focus my image and get a work area that was more than 150mm wide.

It’s at this point you realise why there’s a stop screw in the mechanism. If you turn the focus ring too far past “straight down”, it falls out of the projector. Oops. Luckily it screws right back in but its something to consider when it’s pointing straight down into a vat of resin.

If a projector is used in a permanent place, it usually gets mounted. To help people do this, there are mounting points.

The projector comes with a set of three M4 (read 4mm) screw sockets. To clear the odd shape of the base of the projector, I sourced some 10mm plastic spacers and used some more mud-guard washers to spread the load. 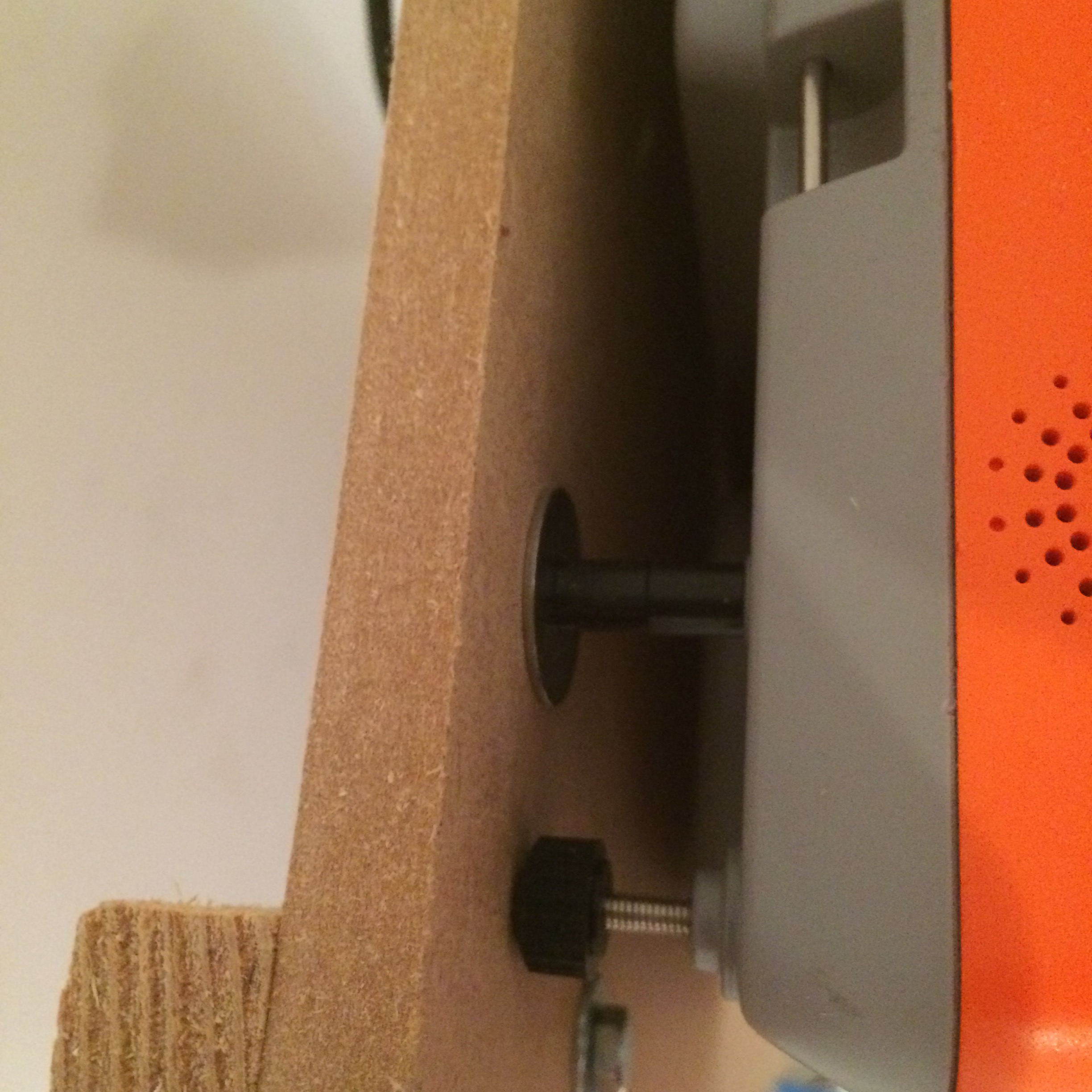 With all that done, the projector was mounted and ready to be used. 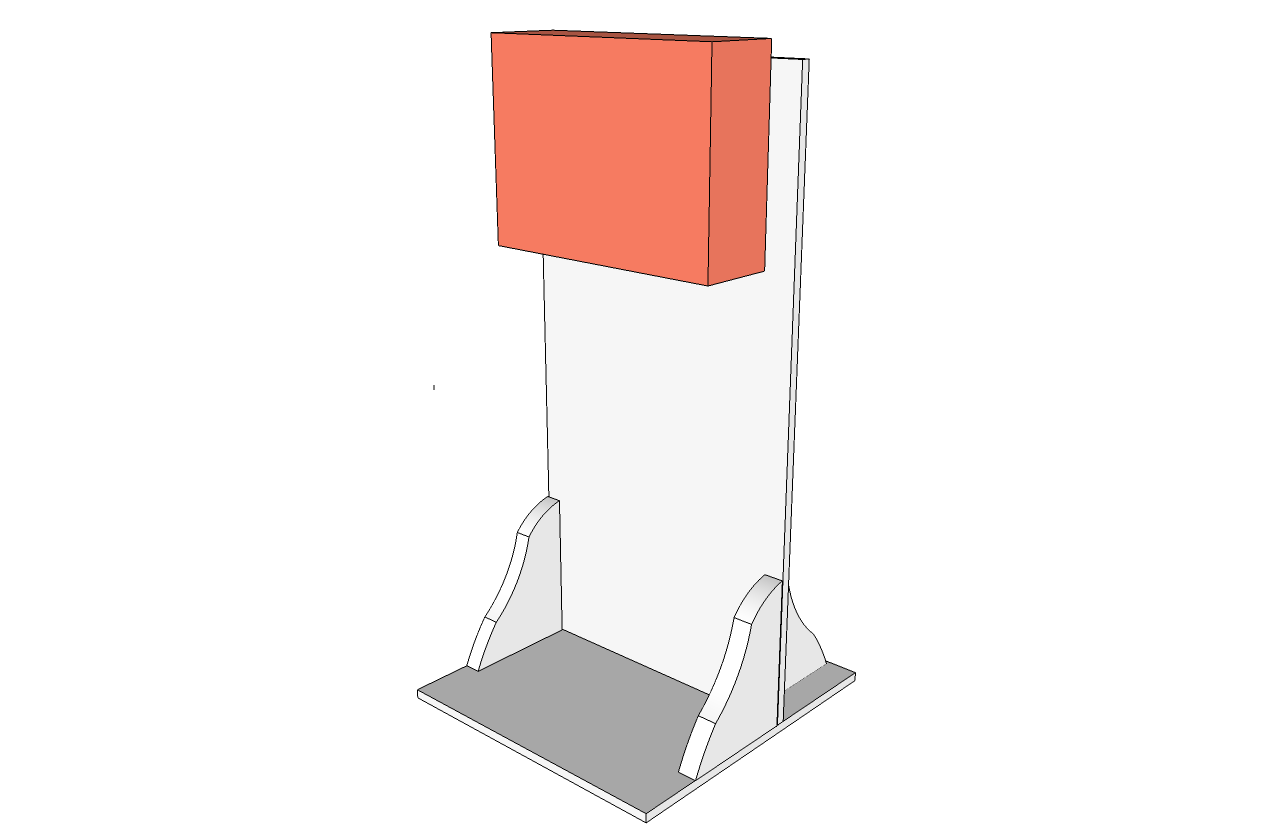 Next, it was time for the build area/shelf.