Thingiverse is great. I’ve been following the growth of the site since it was launched in 2008 and I was still looking at prototyping the MendeLEGO 3d printer.

I’ve been a LEGO fan since I was a kid and I’ve had a LEGO 8860 Technic set (complete with it’s box) since the early 80s. That’s one of the reasons why I started on the MendeLEGO project and why I’m still sad I never managed to finish it.

One of the first things I wanted to try was print my own LEGO bricks. Yes, they won’t be identical to real LEGO brick, the materials I’m using are not the same for starters but the idea of being able to make an iconic LEGO 2×2 Brick was a real draw for me.

Using a Thingiverse model was a quick way to get the physical object that I needed and this is really why that service was created. “Need something?, don’t have it?, print one!” 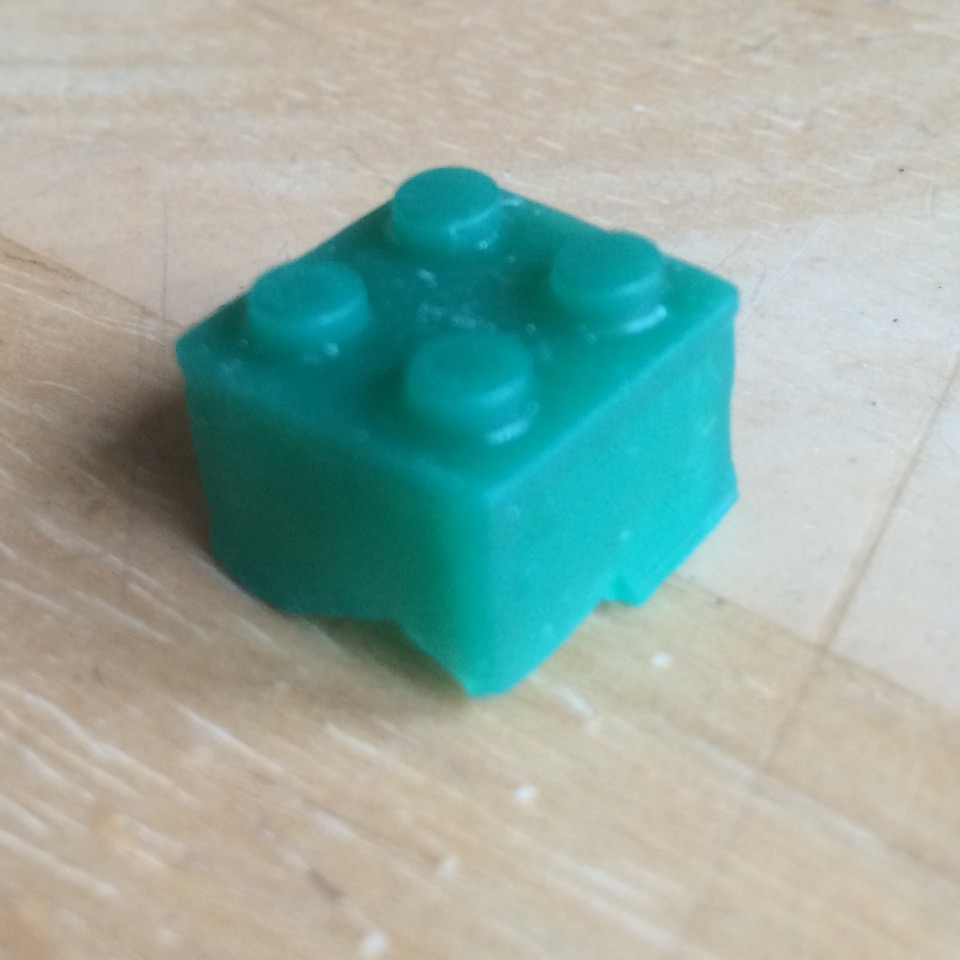 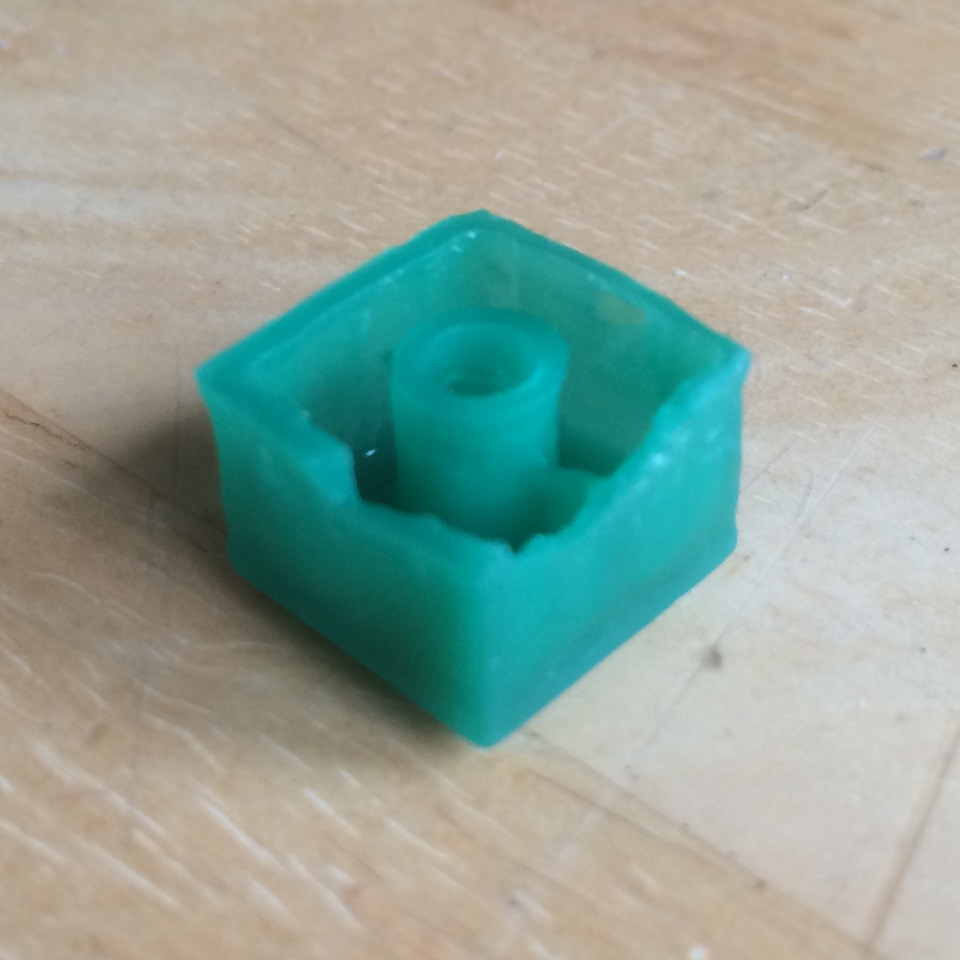 As you can see the shape is pretty much there apart from the walls. There’s something going on with the physical properties of my printer and there are some settings that I need to “dial in” to the right values. I think I’m under exposing the resin.

There’s also the gaping hole in the corner. I’m not sure what is causing this, it’s probably something to do with the mixture in the jar. I might have pulled up a bubble of glycerol into the resin, which is stopping the resin from re-flowing into place. There might be a problem with the resin mixture and I might need to stir it to make sure it’s properly mixed.

Add this to the things I need to learn more about.

Pressing on, I wanted to try print a solid model.

If you know me, you’ll know I’m a big Sci-Fi nerd and growing up in the 70s/80s I was a big Doctor Who fan. Plus living in South Wales meant I had to try printing the TARDIS.

Here’s where the printer hit a problem. 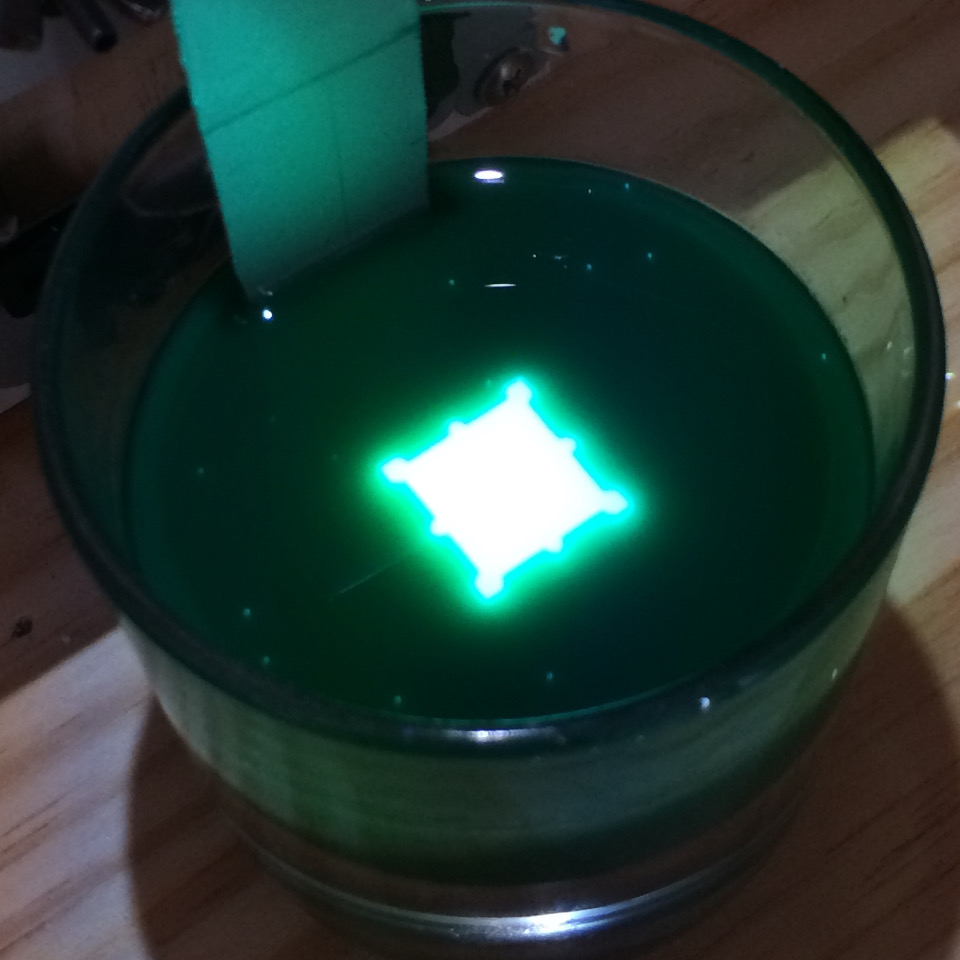 I loaded the STL into Creation Workshop and scaled it down to 30mm, so it would fit inside my build volume.

Half way through the print, the motor started make strange noises. Clicking and knocking. After a short time, the motor drive was hitting the bottom point and the knocking became constant. I stopped the print. 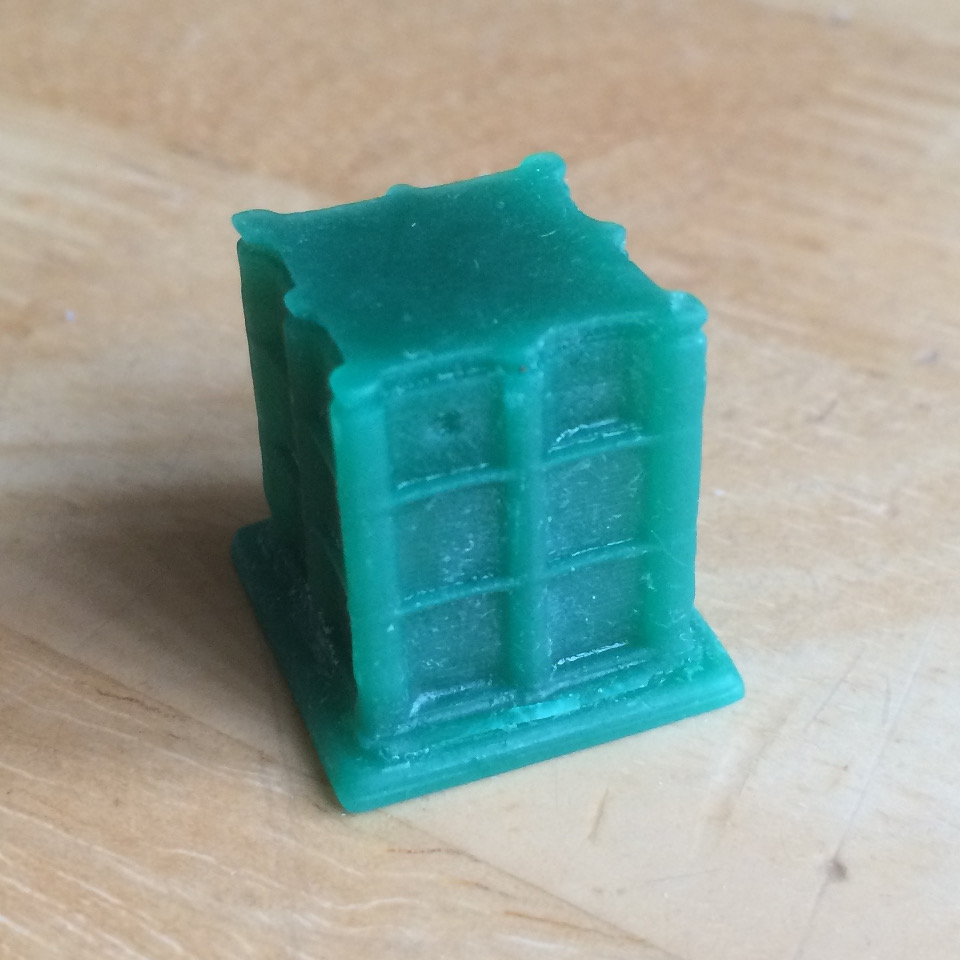 This was what I was left with after I’d cleaned off the wispy layers that hadn’t adhered to the main part of the model.

At first I thought the weight of the model was too much for the mechanism to move through the liquid. The printer works on one layer, lowers the bed 3mm and then raises it back up 2.9mm. This gets a fresh layer of resin on the top to allow the next layer to be added.

I even rotated the TARDIS in CW and tried printing it on it’s side, perhaps I could glue two halves together. 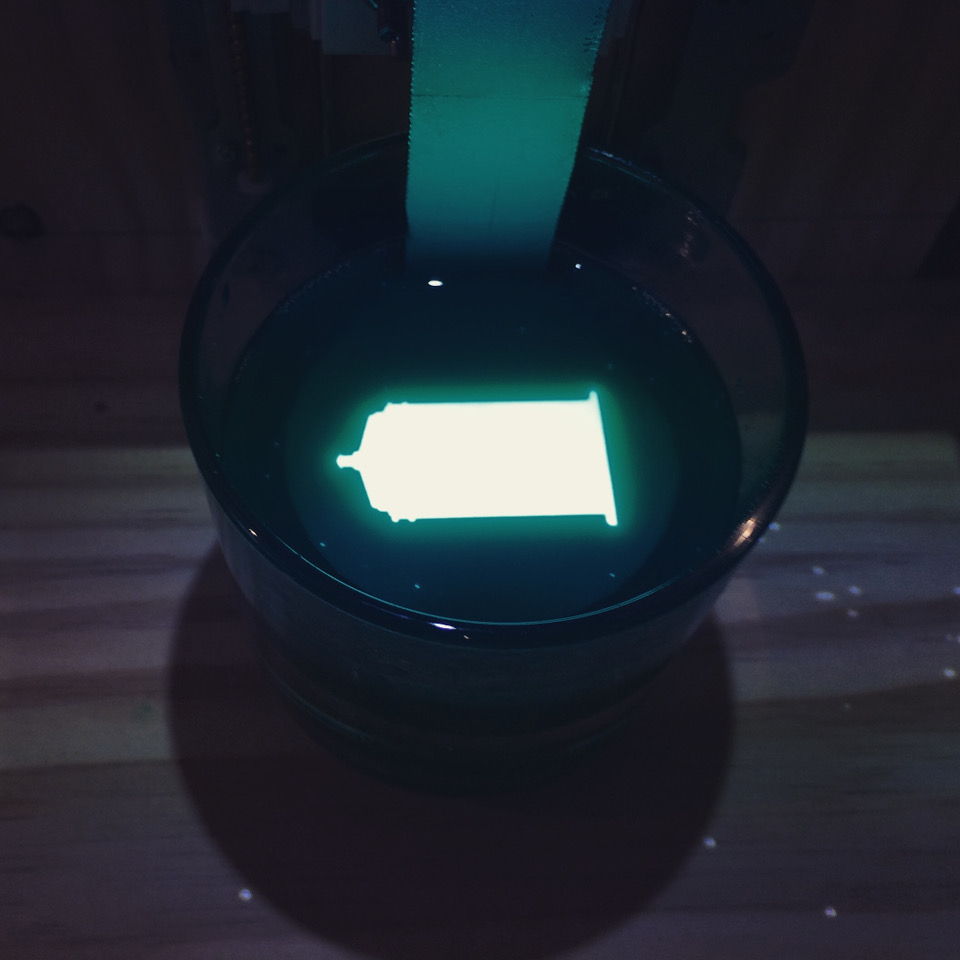 This print failed after only a few mm of the run had been processed. 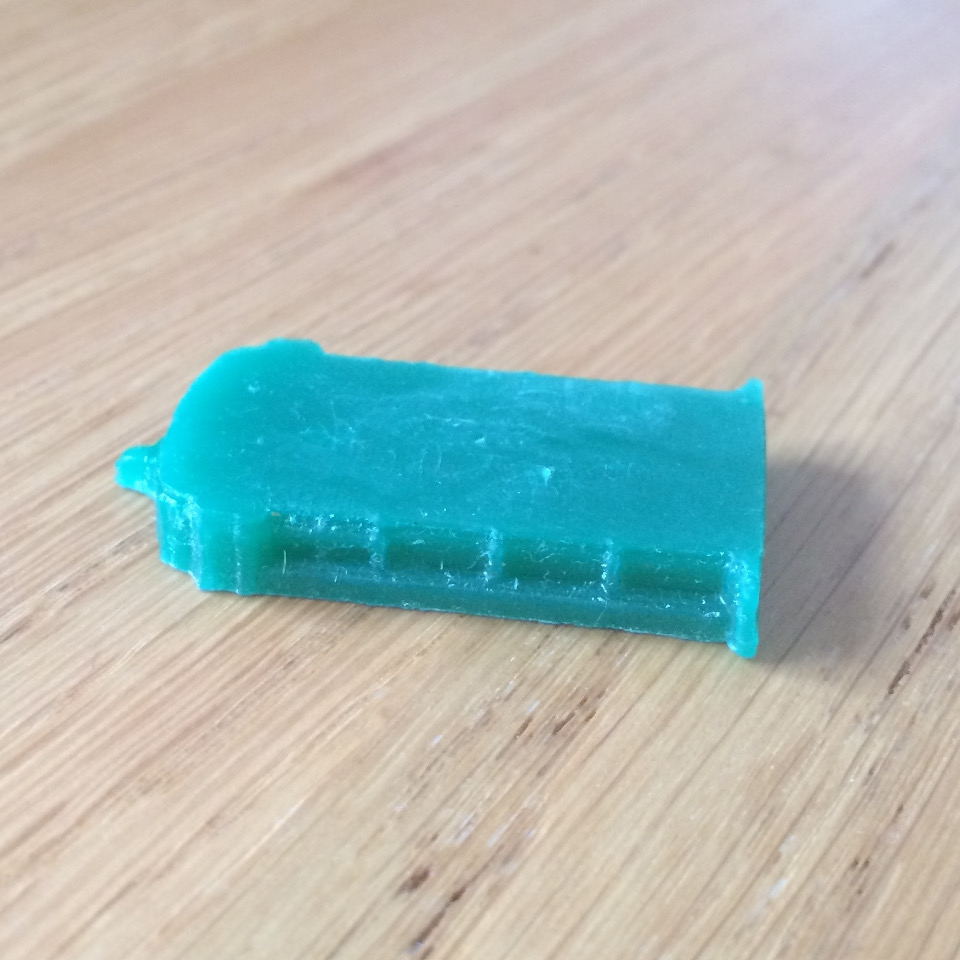 I did some research, checked my electronics and mechanics and realised that the the problem was similar to when I was getting the motor working in the first place and I wasn’t supplying enough volts to the motor.

I could have looked at changing the batteries for different types but in the end I ordered a new 6v PSU to drive the motor. I also picked an adapter that would let me wire up the +/- lines without having to destroy the PSU’s socket.

Was I finally able to run a full height print?

Yes I was and I’ll show you what I made on the final page.